From humble beginnings, the story of Ernest Cognacq and his wife Marie-Louise Jaÿ is a remarkable example of social ascension tied up with the boom in department stores in the late 19th century. 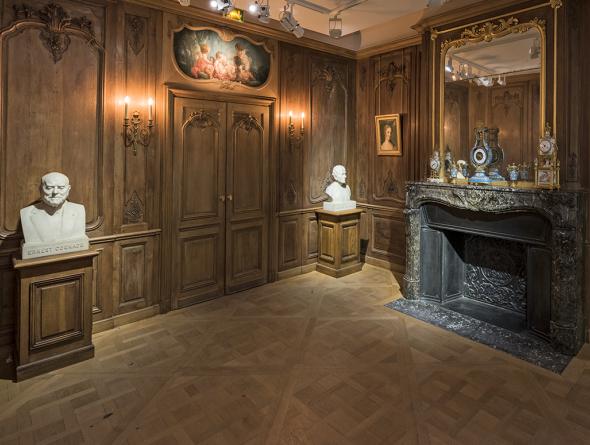 A remarkable example of commercial success

Théodore-Ernest Cognacq was born on 2nd October 1839 in Saint-Martin-de-Ré (Charente-Maritime). At the age of 12, the financial ruin and subsequent death of Cognacq’s father forced him to leave school and begin earning a living as a travelling salesman working between La Rochelle and Bordeaux. He later moved to Paris, seeking his fortune in the great department stores of the age: turned down by the Magasins du Louvre, he found work at La Nouvelle Héloïse, where he also met his future wife Marie-Louise Jaÿ (1838-1925). Cognacq worked in a number of shops in Paris before setting out on his own on Rue Turbigo in 1867: Au Petit Bénéfice. He swiftly went bankrupt, quit Paris to try his luck elsewhere in France, and finally returned to the capital working as a street hawker, setting up shop under the second arch of the Pont-Neuf, formerly the location of the ‘Samaritaine’ hydraulic pump (destroyed in 1813), which earned him the nickname ‘Napoleon’.

At the age of 30, having succeeded in saving up a little money, Cognacq took a sub-let on the premises occupied by a café on the corner of the Rue du Pont-Neuf and the Rue de la Monnaie, which now became the new Au Petit Bénéfice. His plan was to lure in some of the customers of the nearby Halles market and the department store À la Belle Jardinière, which opened on the other side of the Rue du Pont Neuf in 1867. This time, the business was to be a success: in 1871 Cognacq took out a proper lease on the converted café, and took on two employees. The following year he married Marie-Louise Jaÿ, who at the time was working as a shop girl in the dressmaking department of Bon Marché. Through hard work and saving the couple eventually succeeded in buying their store, by now renamed La Samaritaine and turning over some 300,000 Francs per year. Business prospered, thanks in no small part to the innovative sales techniques of the owners (firm, clearly-displayed prices, the option of trying on the clothes before buying…): turnover rose to 600,000F in 1882, then 40,000,000F by 1895; in 1925, sales broke the billion mark. 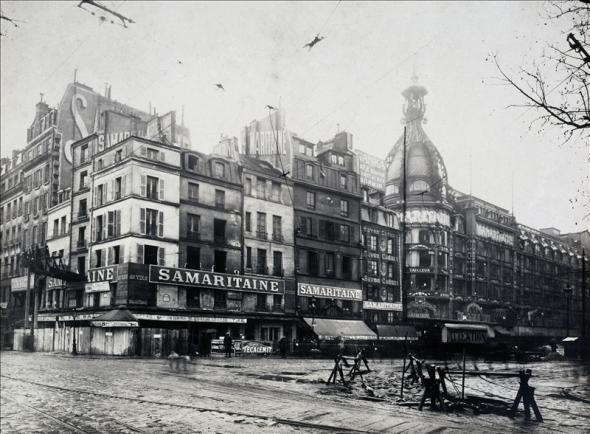 In May 1883, Ernest Cognacq made the acquaintance of Belgian architect Frantz Jourdain (1847-1935), one of the pioneers of Art Nouveau and iron-frame architecture in France. In 1891 Jourdain oversaw the redesign of the interiors of the first La Samaritaine store, as well as the work on the Cognacqs’ home at 65 Avenue du Bois de Boulogne (now Avenue Foch). The couple called on him once again in 1905 to design the second La Samaritaine store, inaugurated in 1910 and boldly embodying the Art Nouveau style with its visible metal frame, twin cupolas and façade adorned with enamelled igneous rock panels, sandstone and mosaic details. Between 1926 and 1928, in partnership with the architect Henri Sauvage (1873-1932), Jourdain extended the building out towards the Seine. The new extension was in the Art Deco style, with urban planning regulations obliging the architects to hide Jourdain’s original metal frame beneath a stone facade. Jourdain subsequently designed new extensions on the Rue de Rivoli, the third and fourth Samaritaine stores, launched in 1930 and 1932 respectively.

La Samaritaine has reopened its historic building in June 2021 after years of renovation work. Owned by the LVMH group, the building houses, alongside the department store, an hotel and a food court.

A passion for philanthropy

Buoyed by their success in the capital, the Cognacqs nonetheless never forgot their provincial origins: Ernest Cognacq funded the creation of a local history museum on the Île de Ré in 1907, while Marie-Louise Jaÿ founded the Jaÿsinia, an Alpine botanical garden in her home town of Samoëns (Haute-Savoie). In parallel with their commercial exploits, the couple actively pursued numerous philanthropic projects – often aimed primarily at employees of La Samaritaine – and founded the Fondation Cognacq-Jay in 1916. This foundation – which is still a going concern – ran a nursery, a medical recovery centre and a nursing home in Rueil-Malmaison, a school in Argenteuil, a maternity clinic in Paris, an orphanage and nursing home in Haute-Savoie and a block of alms-houses in Levallois-Perret. In 1920, the Cognacqs expanded their charity work with the launch of the Prix Cognacq, still awarded by the Foundation to this day in recognition of large families.