Since 1990, the Cognacq-Jay museum has been nestled in an elegant townhouse at the heart of the Marais district, the Donon Hotel. 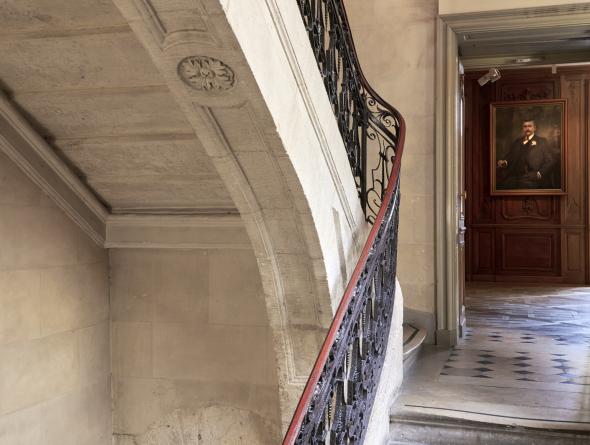 The land on which the Hôtel Donon was constructed fell within the city walls built by Charles V in the fourteenth century. This site was formerly part of the ‘farm’ of Sainte-Catherine-du-Val-des-Ecoliers. In the sixteenth century, Francis I’s work to drain the land in preparation for the construction of the Hôtel Royal de Saint-Pol, on the site now known as the Quai des Célestins, saw the price of land in the Marais shoot up as similar development projects were launched. A whole network of new roads was created in this period. The path which formerly separated the Saint-Catherine farm from the land held by the Ordre du Temple became the new Rue Diane, subsequently renamed the Rue des Trois-Pavillons and now known as Rue Elzévir. Turgot’s famous map, published in 1739, features the house which earned the street its name: a building with three tall ‘pavilions’, on the corner of the Rue des Francs-Bourgeois.

Previous owners of the Donon Hotel

In 1575, Médéric de Donon purchased this land and built himself a house. The Donon family had long been established in the Ile-de -France region; Médéric de Donon himself was Controller General of the Royal Estates, and had married Jeanne della Robbia, daughter of the sculptor Girolamo della Robbia. Médéric de Donon lived here until his death, and the house remained in the family until 1640. It then passed into the possession of the Le Mairats, remaining in this family until 1798. The Hôtel Donon subsequently passed to Bourgois-Hénault de Tourneville, whose descendants owned the house up until the 1930s. As with many buildings in the Marais, during the nineteenth and twentieth centuries the Hôtel Donon was converted into commercial premises and disfigured by insensitive architectural additions. The photographs taken by Eugène Atget attest to this damage. The City of Paris acquired the Hôtel Donon in 1974, and set about restoring it in order to provide a new home for the collections of the Musée Cognacq-Jay. In the meantime, the building was added to the register of Historical Monuments.

The architecture of the Hôtel Donon

The architect who designed the Hôtel Donon opted for a regular, symmetrical design with buildings laid out around a rectangular courtyard. The main house has a courtyard in front of it and a garden behind, with two wings extending toward the street. The south wing probably housed the stables and garages, while the north wing was laid out as one long gallery. Both the courtyard and the garden are flanked by two smaller wings. The structure of the main house is typical of the grand homes constructed in the Marais in the sixteenth century: two floors below stairs – one of which is taken up by the kitchens and servants’ quarters – and two equally-sized floors above ground. The elevated ground floor was taken up by reception rooms, while the upper floor boasts a high beamed ceiling which is among the most magnificent examples to have survived from this period.

The elegance of the architecture owes much to the perfectly-judged arrangement of its windows, alternating between full and half openings. On the courtyard side, the result is a subtle pyramid effect as the two windows set into the roof are united on a single façade. On the garden side, only the full windows are crowned with hemispherical upper windows. This classically-inspired simplicity is not broken up with sculpted decorations of any kind: the panels at the base of the roof are left bare, with simple moulded details accentuating the curve of the upper windows and their simple triangular frames. While the main body of the house seems to have survived intact, the same cannot be said of the other buildings: a structural analysis reveals them to be later additions or extensions.

The changes made in the seventeenth and eighteenth centuries make it difficult to identify the original main entrance to the hotel with any degree of certainty. It seems likely that a door on the ground floor of the north wing in the courtyard gave on to a staircase leading to the private apartments, servants’ quarters and gardens. Comparison with other examples in the vicinity suggests that the current staircase, a cantilevered construction with a wrought-iron handrail, probably dates from the late seventeenth century. The addition of this staircase required a modification to the north wing and so, in the interests of symmetry, to the south wing too. It was probably at this time that an extra floor was added to these wings, a hypothesis corroborated by the discovery of traces of a former roof during renovation work on the north wing. Furthermore, the windows of the lateral wings do not have mullions, unlike those of the main house. The architecture of the façade facing the street, with its arch topped with a sculpted shell panel, is also likely to be a late seventeenth-century addition. Sometime around 1710 work was undertaken to provide direct access from the garden to the reception rooms on the elevated ground floor, with the addition of a patio door giving onto a staircase (Map of Paris by Jaillot, 1774).

Some elements of the original interior decoration have survived: in the ‘low room’ (Room IV of the museum) and the north wing overlooking the garden (Room II) you can still see the original ceiling beams and joists, painted with ornamental motifs including foliage and rosettes. In the same wing, and in the grand reception room on the ground floor (Room III), the white and gold wooden panels date from the early seventeenth-century renovation.

By the end of the sixteenth century, the area which Médéric de Donon had chosen to make his home had become highly fashionable. Architect Philibert de l'Orme had also bought land in the Marais, building himself a house nearby. In 1575 de l’Orme had been dead for five years, but his influence was still to be seen all over Paris. As Controller of the Royal Estates it seems likely that Médéric de Donon would have known Philibert de l’Orme and Jean Bullant, the architect who completed the construction of the Château des Tuileries after de l'Orme’s death. The general layout of the Hôtel Donon bears a strong resemblance to Philibert de l’Orme’s house, including certain innovations which were soon to be widely adopted: servants’ quarters and kitchens set in the vaulted lower ground floor and accessible by a corridor; a staircase in the left-hand wing of the courtyard; lateral wings with arched ceilings on the ground floor and high ceilings on the upper floor; and a general sense of sobriety and restraint in the external decor. The other outstanding example of this style is the Hôtel Carnavalet, built around 1545 in an architectural style which is more ambitious and richly-decorated, but nonetheless structurally identical.

Some of the innovations in the design of the Hôtel Donon are clearly motivated by considerations of convenience, such as the kitchens and servants’ quarters located on the lower ground floor, closer to the reception rooms. Similar arrangements are to be found in many of the neighbouring houses: the Hôtel de Pierre Le Jay – now better known as the Hôtel d'Albret – (1546-1563), the Hôtel de Marle (1560, completed 1572), and, on Rue Elzévir, the Hôtel de Savourny (1585-1587). Other grand houses in the neighbourhood are substantially different, such as the Hôtel Le Mairat on Rue des Francs-Bourgeois (c. 1572-1586) and the Hôtel d'Angoulême on Rue Pavée (1585-1590). These innovations are evidence of the skill and inventiveness of Parisian architects in the late sixteenth century, and their use of the Marais as a testing ground for new styles, even before construction in the area reached its apogee in the seventeenth century.

In spite of its later additions and modifications, the Hôtel Donon is a rare survivor from this period, and the finest surviving example of an architectural style which would enjoy considerable success before being eclipsed by the innovations of Androuet du Cerceau, Mansart, Le Vau and their ilk.