The history of the museum is intimately linked with the history of La Samaritaine, the department store founded by Ernest Cognacq and Marie-Louise Jay. 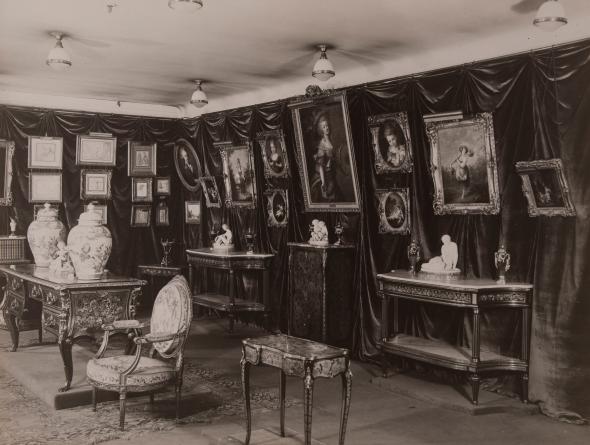 As early as 1925, Ernest Cognacq began holding temporary exhibitions of works from his private collection at the Samaritaine de Luxe, an offshoot of the original store launched in 1917 at 25-29 Boulevard des Capucines. Built in the Opéra district by architect Frantz Jourdain, this building was devoted to luxury goods for the homes of Paris’ haute bourgeoisie. Documentary photographs from the period illustrate Cognacq’s approach to exhibition design: items of furniture set apart on plinths, ornate curtains on the walls and a busy, decorative style.

In 1927, Ernest Cognacq acquired the eighteenth-century wooden panels with which he intended to adorn the walls of his new museum, to be housed in the building next door to the Samaritaine de Luxe. After his death in 1928, this project was brought to fruition by Edouard Jonas, an antiques expert and adviser to Cognacq, in partnership with the beneficiary of the collector’s will – the City of Paris. Officially inaugurated by President Gaston Doumergue on 4th June 1929, the museum was spread over three floors, displaying the Cognacq collection in its entirety in rooms intended to replicate the style of an eighteenth-century townhouse. The preface to the museum’s first Catalogue, provided by art historian Seymour de Ricci in 1929, introduces visitors to the guiding concept of this new museum:

As a private collector, it was never Ernest Cognacq’s intention to compete with the capital’s great museums. With the same natural modesty which ensured that he never resided in a palace, Cognacq’s ambition for his collections was to provide a setting whose moderate dimensions would complement the works while preserving the sense of intimacy which he so cherished. And so, over the three average-sized floors of the Musée Cognacq-Jay, visitors will discover a collection where the vast canvases and sumptuous furnishings which adorn the immense galleries of the Louvre and Versailles are conspicuous by their absence. Instead we are invited to share in the charms of the harmonious surroundings which, to borrow an expression which is particularly apt here, formed the artistic backdrop to French life in the eighteenth century. In this respect the Musée Cognacq-Jay is a welcome counterpart to the great Parisian museums, following the invaluable example set by the Musée Carnavalet.

Following the closure of La Samaritaine de Luxe in 1981, and the sale of the building in 1983, the City of Paris found a new home in which to preserve and present the Cognacq collection, near the Musée Carnavalet.

The museum and the Hotel Donon

Having undergone extensive restoration work between 1986 and1989, the Hôtel Donon, a sixteenth-century townhouse in the heart of the Marais, has been home to the collections of Ernest Cognacq and Marie-Louise Jaÿ since 1990. The collections are exhibited over three storeys in the main house, and in the galleries surrounding the internal courtyard. The layout of the permanent collection was intended as a thematic exploration of eighteenth-century arts, with the top floor reserved for temporary exhibitions and the entrance hall devoted to the history of the collection itself. Over the past twenty years, as new works and displays have come and gone and the codes of museum display have changed, the layout has gradually evolved to reflect the museum’s two major priorities: temporary exhibitions, hosted on the first floor, and the permanent collections, displayed both in period recreations and in galleries dedicated to specific themes or styles.